THE HEAD'S ON REVELATION'S BEASTS
Rev. 13
THE DRAGON AND HIS TWO BEASTS
by Ulrike
ART by ASHLIN 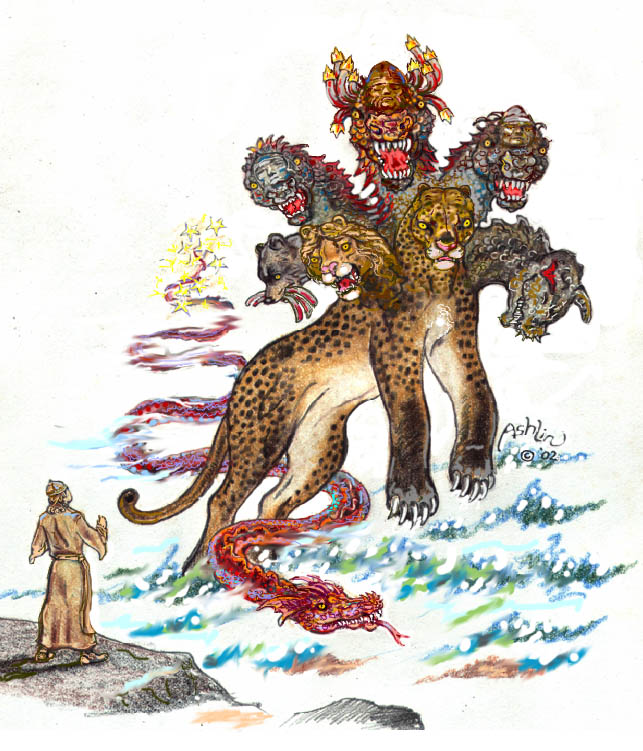 Remember the Beasts in Daniel 7 which came out of the sea? This beast in Revelation 13, which also comes out of the sea, is all four of those beasts wrapped into one.

1. A leopard body (Greece);
2. Bear feet (Media Persia),
3. A lion's mouth, (Babylon)
4. The terrible beast (Roman)
These four constitute four of it's heads.
The religious ideas and ideologies of these kingdoms are very much in the thinking patterns of this beast from the sea.

The heads on the Revelation 13 beast are:

1. Lion-- the beast speaks the religion of Babylon.

2. Bear-- the beast has the feet of the bear representing Persia

3. Leopard representing the body of the beast built on Greek philosophies.

4. The Roman head-- 5. The papal head
Which, in Daniel 7 grew out of the Roman beast as a stout horn WITH A FACE AND MOUTH and eyes, it grew out from amongst the ten horns-- 6. The wounded head
But I saw one of the heads as it was wounded to death.

And the two horned beast caused the earth and them which dwell therin to worship the first beast saying let us make an image to the beast...
and caused as many as would not worship the image of the beast should be killed.

The beast of Revelation 13:1-11 shows the formation, history and future of the Papal Power.
The dragon has the same heads except that it's sixth head is not wounded.

The scarlet beast of Rev. 17 has the same seven heads as the dragon, it's sixth head is not wounded either, but it also has an eighth which is not really another head at all.

The following chart shows an interesting "mirroring" principle in the seven heads.

Babylon
The HEAD of the image (Dan. 2)
Attempts to make whole
image Babylon (Dan. 3)
Forced worship of image
Death for those who don't
Lion
Destroyed Jerusalem

Babylon
An Image of the Beast (13:14-15)
All the world forced to
worship the beast and image (13:15)
Death for those who don't
Speaks with the mouth of lion (first beast)
Attempts to destroy the saints
But this time Babylon is destroyed
and God's people inherit New Jerusalem

There was war in heaven (Rev. 12)
Isaiah 14 The king of Babylon,
Lucifer seeks to set throne
above God's throne
and to sit on the mount of assembly on the heights of the North

The false christ --
the dragon which deceives the whole world (12:9)
and they worship the dragon (13:4)
Return to Home Page