Welcome!
Close
Would you like to make this site your homepage? It's fast and easy...
Yes, Please make this my home page!
No Thanks
Don't show this to me again.
Close
Bible Adventism
Sermon Four
by James S. White The Church Not in Darkness
TEXT: But ye, brethren, are not in darkness, that that day should overtake you as a thief. 1 Thess.5:4

For the consolation of those in the church whose hearts might bleed with bereavement, the apostle undertakes to dispel their griefs by removing their ignorance concerning those who sleep in Jesus. He addresses the church at Thessalonica thus: 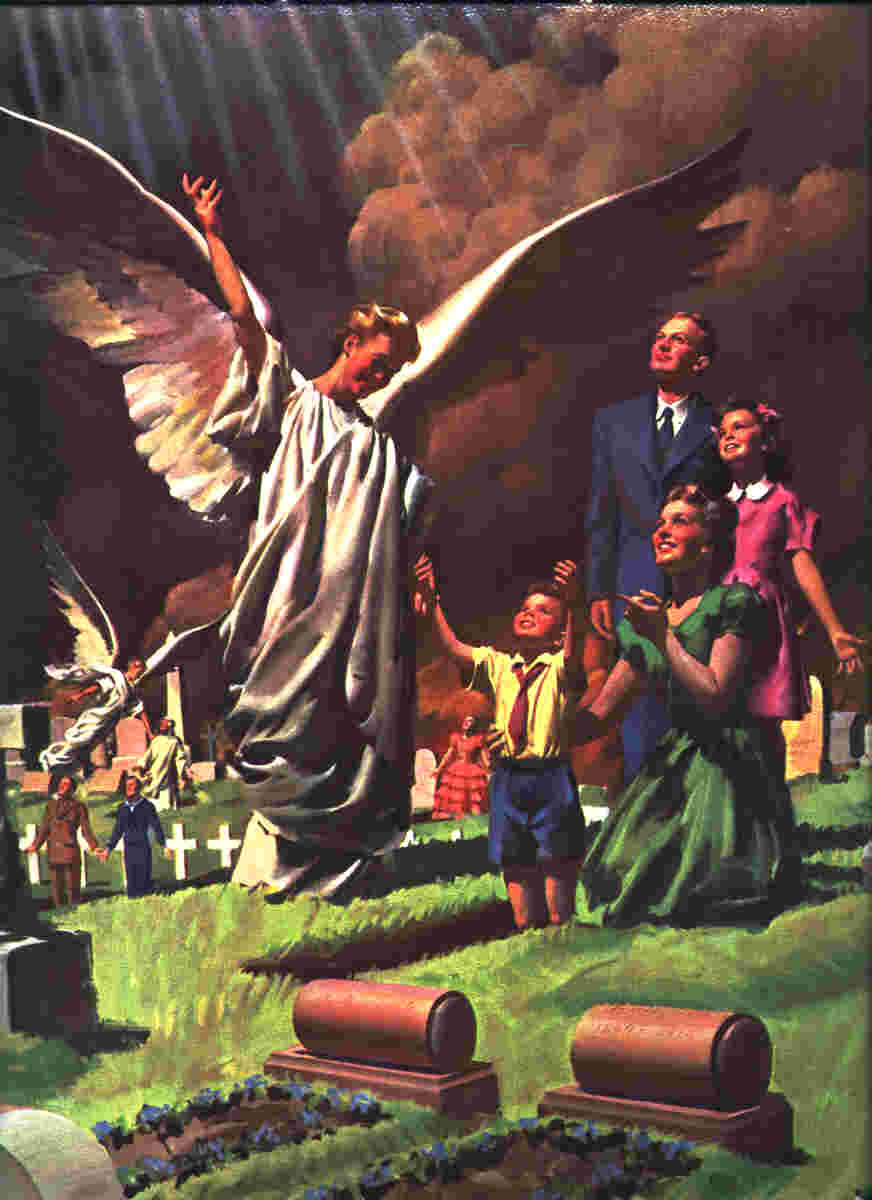 "But I would not have you to be ignorant, brethren, concerning them which are asleep, that ye sorrow not, even as others which have no hope. For if we believe that Jesus died and rose again, even so them also which sleep in Jesus will God bring with him. For this we say unto you by the word of the Lord, that we which are alive and remain unto the coming of the Lord shall not prevent [go before] them which are asleep. For the Lord himself shall descend from Heaven with a shout, with the voice of the archangel, and with the trump of God; and the dead in Christ shall rise first: then we which are alive and remain shall be caught up together with them in the clouds, to meet the Lord in the air; and so shall we ever be with the Lord. Wherefore comfort one another with these words." Chap.4:13-18.

The apostle would not have the church ignorant concerning the dead. He would have them instructed relative to the hope that may be cherished of those who fall asleep in Jesus. The church believes that "Jesus died and rose again, " and that God "brought again from the dead our Lord Jesus Christ."

Page 66
Very well; "So them also which sleep in Jesus will God bring with him." As certainly as he brought his Son from the dead, and took him up to his own throne, just so certainly will God also bring from the dead all who sleep in Jesus, and will take them up to Heaven, and place them on the throne of the Son.

The day named in the text is not the day of the believer's death. The apostle, in giving instruction for the comfort of the church under bereavements, does not point to death as the gate to endless joys, through which the pious dead immediately pass to God's right hand, where there are fullness of joy and pleasures forevermore. No. They sleep in Jesus. And their slumbers will not be broken till the last trump shall awake them. The apostle looks forward over the still-remaining long period of the slumbers of the just, to the descent of the Lord from Heaven, the resurrection of the righteous to immortality, as the glad hope of the just of all ages.

These (not the terrors of death and the grave,) are the grand events that introduce the glories of the life to come. To these, the prophets, Christ, and the apostles, have distinctly pointed as the consummating events of the believer's hope, and the source of their anticipated joys. After spreading before us these events which introduce the burning glories of the day of God, the apostle concludes his remarks upon this branch of the subject by this remarkable sentence: "Wherefore comfort one another with these words." Thus the apostle distinctly states the manner and object of the second advent of Jesus Christ, and treats the doctrine as a legacy to the church, given to be a source of consolation and comfort, especially to those mourning in consequence of bereavements.

"But of the times and the seasons, brethren, ye have no need that I write unto you. For yourselves know perfectly that the day of the Lord so cometh as a thief in the night. For when they shall say, Peace and safety, then sudden destruction cometh upon them, as travail upon a woman with child; and they shall not escape. But ye, brethren, are not in darkness, that that day should overtake you as a thief." 1 Thess.5:1-4.

Paul here speaks prophetically, and describes the state of things just prior to the end. He designates two classes by the words ye and they. The word ye represents those whom he calls brethren, who are well instructed relative to the times and seasons, and therefore are awake, and waiting and watching for their Lord. The word they represents those who treat the subject of the coming of Christ as not worthy of their especial attention; therefore, while some are sounding the alarm, they see no evidences of the soon coming of the Lord, and are saying, Peace and safety.

The apostle continues: "Ye are all the children of the light, and the children of the day: we are not of the night, nor of darkness. Therefore let us not sleep as do others; but let us watch and be sober. For they that sleep, sleep in the night; and they that be drunken, are drunken in the night. But let us, who are of the day, be sober, putting on the breastplate of faith and love; and for an helmet, the hope of salvation. For God hath not appointed us to wrath, but to obtain salvation by our Lord Jesus Christ." Verses 5-9.

Page 67
The two classes, the position of each, and the destiny of both, are distinctly stated. Certainly those who teach that the day of the Lord will come on all as a thief in the night, have not fully examined the subject. For their especial benefit, we will repeat the points of difference, thus:

No truth of Inspiration can be more clearly declared than that "surely the Lord God doeth nothing, but he revealeth his secret unto his servants the prophets." Amos 3:7. Before visiting men and nations with judgments, God has sent forth warnings sufficient to enable the believing to escape his wrath, and to condemn those who have not heeded the warnings. This was the case before the flood. "By faith Noah, being warned of God of things not seen as yet, moved with fear, prepared an ark to the saving of his house, by the which he condemned the world." Heb.11:7.

At a later period, when the nations had become sunken in idolatry and crime, and the destruction of wicked Sodom was determined, the Lord said, "Shall I hide from Abraham that thing which I do, seeing that Abraham shall surely become a great and mighty nation, and all the nations of the earth shall be blessed in him?" Gen.18:17, 18.

Page 69
And due notice was given to righteous Lot, who, with his daughters, was preserved; and none, even in that guilty city, perished without due warning. Lot evidently warned the people; and, in thus communing with them, was "vexed with the filthy conversation of the wicked." 2 Pet.2:7, 8.

When he warned his sons-in-law, "he seemed as one that mocked." Gen.19:14. And when "the men of the city, even the men of Sodom, compassed the house round, both old and young, all the people from every quarter, " Lot warned them, and entreated them to desist from their wickedness. And they at once did that which all sinners since the days of righteous Lot have been disposed to do to those who faithfully warn them of their sins; namely, they charged him with being a judge. Before the destruction of Jerusalem by Titus, a forerunner was sent to prepare the way before the Lord. Those who did not receive Christ, were rejected, "Because" - as he said to Jerusalem when warning the people of the destruction of their city and temple - "thou knewest not the time of thy visitation." Luke 19:44.

We have on record the Lord's prediction of the destruction of Jerusalem during the time of the generation that rejected him, which was fulfilled in less than forty years from the time of his crucifixion. And that the Christians in Judea might escape its impending doom, they were told that when they should "see Jerusalem compassed with armies, " or, as recorded by Matthew, "the abomination of desolation spoken of by Daniel the prophet stand in the holy place, " they were to "flee to the mountains." Luke 21:20; Matt.24:15. They heeded the admonition, and escaped in safety to Pella.

Page 7-
Such is the testimony of Inspiration respecting the dealings of God with his people in past ages. And it cannot be supposed that God will change his course relative to the future, when that future is to realize the crowning consummation of all prophetic declarations. No, no, indeed! Before the vials of Jehovah's unmingled wrath shall be unstopped in heaven, and poured out into the earth, upon the shelterless heads of the unbelieving, the world will be fully warned. Before the Son of Man thrusts in his sickle to gather the precious harvest of the earth, that harvest must be fully ripened for the heavenly garner. And before the vine of the earth shall be gathered for the winepress of the wrath of God, her clusters must also be fully ripened. Rev.14:14-19. And the last message of fearful warning to the people will ripen and prepare the believing for salvation, and also the unbelieving for salvation, and also the unbelieving for destruction.