HISTORY OF THE SABBATH
by J.N. Andrews

CHAPTER I - THE CREATION 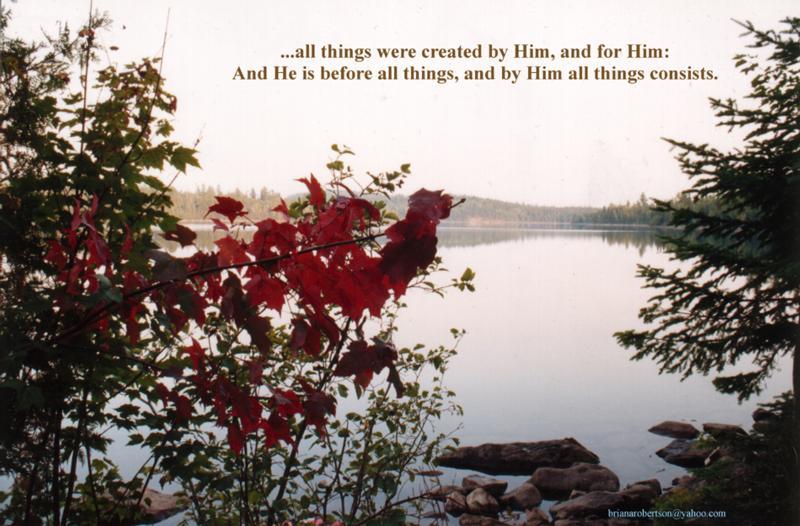 In this chapter:
Time and eternity
- The Creator and his work
- Events of the first day of time
- Of the second
- Of the third
- Of the fourth
- Of the fifth
- Of the sixth.

TIME, as distinguished from eternity, may be defined as that part of duration which is measured by the Bible. From the earliest date in the book of Genesis to the resurrection of the unjust at the end of the millennium, the period of about 7000 years is measured off.1 Before the commencement of this great week of time, duration without beginning fills the past; and at the expiration of this period, unending duration opens before the people of God. Eternity is that word which embraces duration without beginning and without end. And that Being whose existence comprehends eternity, is he who only hath immortality, the King eternal, immortal, invisible, the only wise God.2

When it pleased this infinite Being, he gave existence to our earth. Out of nothing God created all things;3 "so that things which are seen were not made of things which do appear." This act of creation is that event which marks the commencement of the first week of time. He who could accomplish the whole work with one word chose rather to employ six days, and to accomplish the result by successive steps. Let us trace the footsteps of the Creator from the time when he laid the foundation of the earth until the close of the sixth day, when the heavens and the earth were finished, "and God saw everything that he had made, and behold, it was very good."4

On the first day of time God created the heaven and the earth. The earth thus called into existence was without form, and void; and total darkness covered the Creator's work. Then "God said, Let there be light; and there was light." " And God divided the light from the darkness," and called the one day, and other night.5

On the second day of time "God said, Let there be a firmament [margin, Heb., expansion] in the midst of the waters, and let it divide the waters from the waters." The dry land had not yet appeared; consequently the earth was covered with water. As no atmosphere existed, thick vapors rested upon the the face of the water; but the atmosphere being now called into existence by the word of the Creator, causing those elements to unite which compose the air we breathe, the fogs and vapors that had rested upon the bosom of the water were borne aloft by it. This atmosphere or expansion is called heaven.6

On the third day of time God gathered the waters together and caused the dry land to appear. the gathering together of the waters God called seas; the dry land, thus rescued from the waters, he called earth. "And God said, Let the earth bring forth grass, the herb yielding seed, and fruit-tree yielding fruit after his kind, whose seed is in itself, upon the earth: and it was so." "And God saw that it was good."7

On the fourth day of time "God said, Let there be lights in the firmament of the heaven, to divide the day from the night; and let them be for signs, and for seasons, and for days, and years." "And God made two great lights; the greater light to rule the day, and the lesser light to rule the night; he made the stars also." Light had been created on the first day of the week; and now on the fourth day he causes the sun and moon to appear as light-bearers, and places the light under their rule. And they continue unto this day according to his ordinances, for all are his servants. Such was the work of the fourth day. And the Great Architect, surveying what he had wrought, pronounced it good.8

On the fifth day of time "God created great whales, and every living creature that moveth, which the waters brought forth abundantly, after their kind, and every winged fowl after his kind: and God saw that it was good."9

On the sixth day of time "God made the beast of the earth after his kind, and cattle after their kind, and everything that creepeth upon the earth after his kind: and God saw that it was good." Thus the earth, having been fitted for the purpose, was filled with every order of living creature, while the air and waters teemed with animal existence. To complete this noble work of creation, God next provides a ruler, the representative of himself, and places all in subjection under him. "And God said, Let us make man in our image, after our likeness: and let them have dominion over the fish of the sea, and over the fowl of the air, and over the cattle, and over all the earth, and over every creeping thing that creepeth upon the earth." "And the Lord God formed man of the dust of the ground, and breathed into his nostrils the breath of life; and man became a living soul. And the Lord God planted a garden eastward in Eden; and there he put the man whom he had formed. And out of the ground made the Lord God to grow every tree that is pleasant to the sight, and good for food; the tree of life also in the midst of the garden, and the tree of knowledge of good and evil." Last of all, God created Eve, the mother of all living. The work of the Creator was now complete. "The heavens and the earth were finished, and all the host of them." "And God saw everything that he had made, and behold, it was very good." Adam and Eve were in paradise; the tree of life bloomed on earth; sin had not entered our world, and death was not here, for there was no sin. "The morning stars sang together, and all the sons of God shouted for joy." Thus ended the sixth day.10

3 Dr. Adam Clarke, in his Commentary on Gen.1:1, uses the following language: "[Created] Caused that to exist which previously to this moment, had no being. The rabbis, who are legitimate judges in a case of verbal criticism on their own language, are unanimous in asserting that word bara, expresses the commencement of the existence of a thing: or its egression from nonentity to entity . . . . These words should be translated: `God in the beginning created the substance of the heavens and the substance of the earth; i.e., the prima materia, or first elements, out of which the heavens and the earth were successively formed.' "

Purchase's Pilgrimage, b. i. chap. ii., speaks thus of the creation: "Nothing but nothing had the Lord Almighty, whereof, wherewith, whereby, to build this city" [that is the world].

Dr. Gill says: "These are said to be created, that is, to be made out of nothing; for what pre-existent matter to this chaos [of verse 2] could there be out of which they could be formed?"

"Creation must be the work of God, for none but an almighty power could produce something out of nothing." Commentary on Gen.1:1.

John Calvin, in his Commentary on this chapter, thus expounds the creative act: "His meaning is, that the world was made out of nothing. Hence the folly of those is refuted who imagine that unformed matter existed from eternity."

The work of creation is thus defined in 2 Maccabees 7:28: "Look upon the heaven and the earth, and all that is therein, and consider that God made them of things that were not; and so was mankind made likewise."

That this creative act marked the commencement of the first day instead of preceding it by almost infinite ages is thus stated in 2 Esdras 6:38: "And I said, O Lord, thou spakest from the beginning of the creation, even the first day, and saidst thus: Let heaven and earth be made; and thy word was a perfect work."

Wycliffe's translation, the earliest of the English versions, renders Gen.1:1, thus: "In the first, made God of naught heaven and earth. <Return>

To Contents Page of "History of the Sabbath"