The Nature of the Judgment
By Stephen Haskell 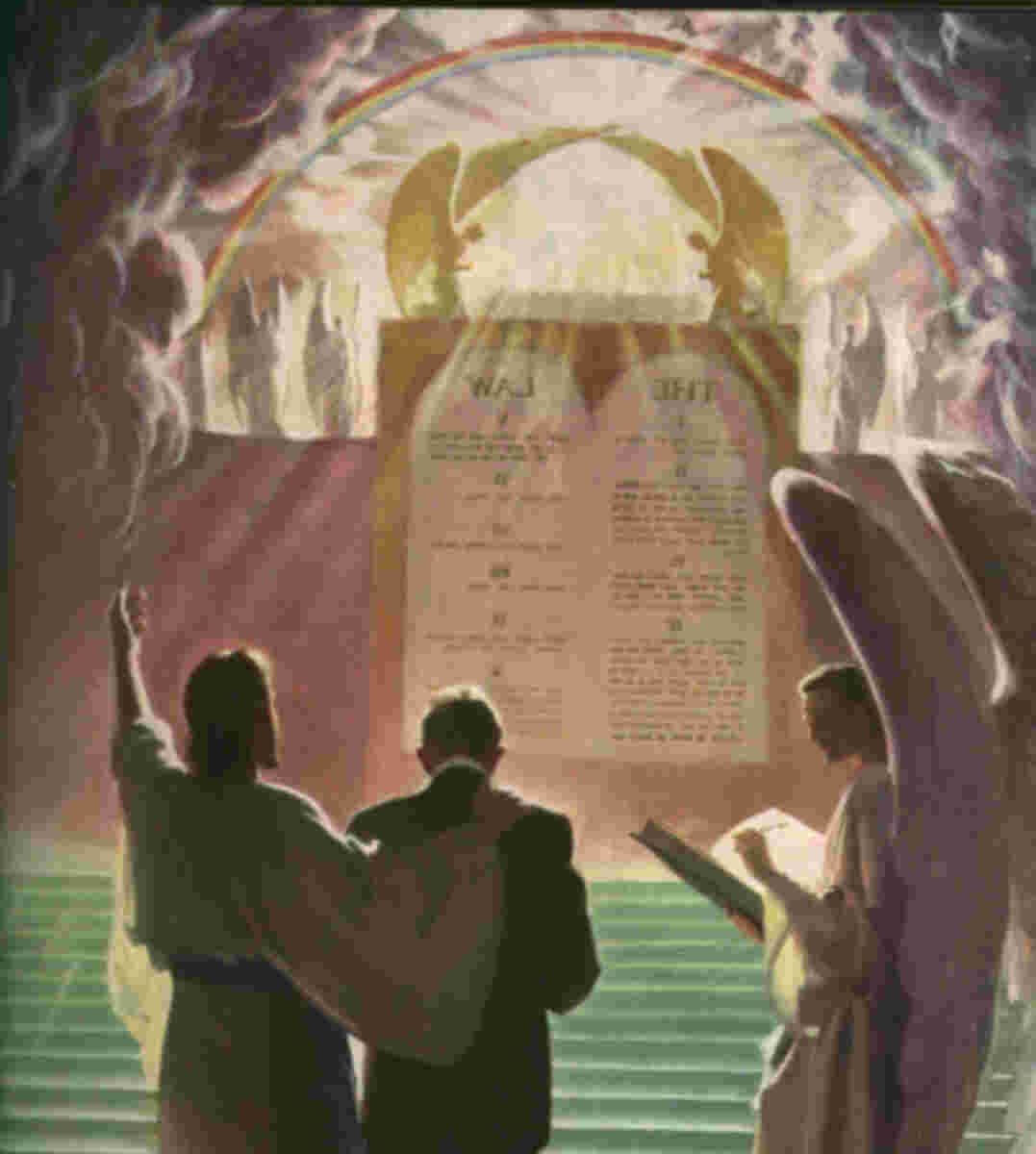 The judgment is spoken of by every Bible writer. It is mentioned over a thousand times in the Sacred Writings. It is more solemn than death; for death separates friends only until the resurrection, but facing the judgment unprepared separates them forever. No one will escape it. To ignore the thought of the judgment and live without preparing for it, will not evade it. Solomon recognized this fact when he wrote, "Rejoice, O young man, in your youth, and let you heart cheer you in the days of your youth, and walk in the ways of thine heart, and in the sight of thine eyes: but know this, that for all these things God will bring you into judgment." (Eccl. 11:9)

The decisions of earthly courts may often be changed by money and friends, and the guilty may be released; but not so in the heavenly courts. There every one must meet the record of his own life. "Everyone...shall give account of himself to God." (Rom. 14:12) Earthly parents have been known to sacrifice everything they possessed to save ONE child from condemnation of earthly courts. Think you our heavenly Father would let Satan destroy all His earthly children without an effort to save them? He risked all heaven for their sakes. "God so loved the world, that He gave His only begotten Son, that whosoever believes in Him should not perish, but have everlasting life." (John 3:16) No human being can face his life record in the books of heaven, and escape condemnation, unless belief in Christ and a love for His service is a part of that record.

Christ, the heavenly Advocate, will plead the cases of all who have given Him their sins. He says, "I even I, am He that blots out your transgressions for My own sake, and will not remember thy sins." (Isa. 43:25) the life record, scarlet with sins and wretchedness, the Saviour covers with the spotless robe of His righteousness; and the Judge, looking upon it, sees only the sacrifice of His Son, and the record is, "Accepted in the Beloved." who can reject such infinite love?

The judgment involves, first, the investigation of every case, the testimony of witnesses, and the plea of the advocate, if there is an advocate. Then comes the decision of the court; after that follows the execution of the sentence rendered by the court. A just sentence can not be rendered in any court until the witnesses have borne their testimony; for that reason a just sentence could not be executed upon an individual at death.

If the Bible record were silent upon this point, it would still be apparent at a glance that the judgment could not be held before the last generation had lived their life; but the Bible is not silent. The date of the opening of this great tribunal was revealed by the Lord thousands of years before it took place. Peter taught the same truth. "Repent ye therefore, and be converted, that your sins may be blotted out, when the times of refreshing shall come from the presence of the Lord; and He shall send Jesus Christ, which before was preached unto you." (Acts 3:19,20) The sins will be blotted out just before the coming of the Lord.

The investigative judgment is an examination of the life record kept in heaven. Daniel says that when the judgment was set, "the books opened." (Dan. 7:9,10) there are several books mentioned in connection with the records of heaven. The book of remembrance records even the thoughts of the heart. (Mal. 3:16) How just and merciful is our God that He takes cognizance of it when we only think upon His name! Often when pressed by temptation, our souls cry out after the living God, and a faithful record is kept of it all. Many deeds are done in darkness, hidden from even the most intimate associates; but when the books of heaven are opened, God "will bring to light the hidden things of darkness, and will make manifest the counsels of the heart." (1 Cor. 4:5) "For God shall bring every work into judgment, with every secret thing whether it be good, or whether it be evil." (Eccl. 12:14) Not only the deeds are recorded, but the motives or counsels of the heart that prompted the deed; and of the bitter tears of repentance shed in secret the Lord says, Are they not all in My book? (Mal. 3:16, Ps. 56:8 Heb. 4:12,13)

Our daily conversation, the words spoken without thought, we may count of little worth, but "every idle word that me shall speak, they shall give account thereof in the day of judgement: for by thy words you shall be justified, and by your words you shall be condemned." (Matt. 12:36,37) Words are the index of the heart, "for out of the abundance of the heart the mouth speaks." (Matt. 12:34)

The place of birth and the environment, everything that can in any way influence the life record, is all recorded in the books of heaven.

The most wonderful book of all the heavenly records that pertain to humanity, is the book of life. This book contains the names of all who have professed the name of Christ. (Phil 4:3) To have one' name recorded in that book is the highest honor given to mortals. (Luke 10:19,20)

It is a source of great rejoicing to know that our names are written in heaven, (Luke 10:20) but the life must be in harmony with heavenly things if our names are to remain with the righteous. The names of the unfaithful do not remain in the book of life (Ex. 32:33; Rev. 13:8, 17:8) they are written in the earth: (Jer. 17:13) for all their hopes and affections have clung to earthly things. When the cases of all whose hearts are the dwelling-place of the Most High and whose lives show forth His character, come up in the heavenly court, Jesus Christ the righteous will be their Advocate. (1 John 2:1) he will confess their names before the Father and before the angels. Their sins will be blotted out, and their names retained in the book of life; and they will be clothed with the write raiment of Christ's righteousness. (Rev. 3:5)

On the day of atonement in the typical service only those wins which had been confessed and transferred to the sanctuary through the sin-offering, were carried out and laid upon the head of the scapegoat. In the investigative judgment, only the cases of those who have confessed their sins will be investigated. (Only those who have at some time called upon the name of the Lord for salvation)(Rom. 10:13, Matt. 7:21) Their names will be in the book of life, and Peter states, "Judgment must begin at the house of God; and if it first begins at us what shall the end be of them that obey not the gospel of God? (1 Peter 4:17) The cases of those who have not served God (or called upon His name for salvation) will go by default. There will be no one to present them.. They have no advocate in the heavenly court.

Sad indeed will be the state of those who have started on the heavenly way, but after experiencing the joy of sins forgiven and the peace of God in the heart, have returned to the world and its follies. Their names have been written int he book of life, and their cases will be presented, but only to have the sentence, "Unfaithful," passed upon them, and their names blotted forever from the book of life.

When the Savior comes in the clouds of heaven, He will give reward to the righteous; but final judgment upon the wicked cannot yet be executed, for all are to be judged "out of those things which were written in the books, according to their works." (Rev. 20:12)

During the thousand years following the second advent of Christ to the earth, the righteous will join with Christ in judging the wicked. (Rev. 20:4; 1 Cor. 6:2,3) Then the justice of God in condemning the wicked will be demonstrated before all. The fact that they had no part in the first, or investigative judgment, that their names were not in the book of life, and no one represented them in the court of heaven, is sufficient to condemn them. The books of heaven, containing a faithful record of their lives, condemn them. The witness of the angels who have dpt the record also condemns them; but with all that evidence, God has each name considered by the saints from the earth.

There will be many among the lost who have been accounted righteous by outward appearance; and if they should be destroyed without an examination of the records by the saints, there might be occasion to question the justice of God'; but when the records reveal how some have worked from selfish motives, and others have been guilty of cherished sins covered from the view of their fellow-men, the awfulness of sin and the longsuffering of God will be appreciated.

The Savior said that those who had followed him while here on earth would judge the twelve tribes of Israel. (Matt. 19:27-28) Then when the records revealing the fact that the chief priests cried, "Crucify Him! Crucify Him!" are opened in heaven, John, who followed his Lord through that cruel trial, will be able to say, "I heard them speak the awful words,"

As the long list of names is brought in review, the saints can appear as witnesses. When the tyrant Nero's name comes up, and the record states how he tortured the saints of God, witnesses will be there who can say, "We are the ones who were burned to light his garden." Redeemed ones gathered out of every age will sit in the judgment as the cases of the wicked are examined, and the punishment will be meted out to each one according to his works.(Pr. 24:12, Jer. 25:14, Matt. 16:27, 2 Cor. 11:15, Rev. 2:23; 20:13)

In the day of judgment, God will call to the heavens above, He will call for the records that have been preserved by angels— records of men's lives, of the words they have spoken, of the deeds they have done; even the most secret acts will then be called upon to bear testimony, for "our God shall come, and shall not keep silence; a fire shall devour before Him, and it shall be very tempestuous round about Him. He shall call tot he heavens from above, and to the earth, that He may judge His people." There is one class of people who will then be gathered. He says, "Gather My saints together unto Me; those that have made a covenant with Me by sacrifice. And the heavens shall declare His righteousness: for God is judge Himself." (Ps. 50:3-6)

This day of God's investigative judgment we have now entered, and the executive part of it will take place at the close of probation, after the witnesses have orne their testimony.

When the judgment of the wicked closes, the saints, the angels, and all the universe will be in harmony with the decisions rendered. At the end of the thousand years, when fire from heaven devours the wicked as "stubble fully dry," (Nahum 1:9,10) all the universe will say, "Even so, Lord God Almighty, true and righteous are Thy judgments." (Rev. 16:7)

The Three Books of Judgment 1. The Book of Life

2. The Book of Remembrance


"The Cross and Its Shadow" Chapter 31, pp. 230-238
Stephen Haskell was 22 years old when he first meet Sabbath keeping Adventists. That was in 1853.
During the next 67 years Haskell served as an Adventist evangelist, church administrator, missionary, writer, and Bible teacher.
His books are the result of many years of prayerful study of the scriptures and were written to awaken in people's minds the Christian view of Christ's character in the prophecies and in the sanctuary.

Table of Contents for Haskell's "Cross and Its Shadow"