Welcome!
Close
Would you like to make this site your homepage? It's fast and easy...
Yes, Please make this my home page!
No Thanks
Don't show this to me again.
Close
The Feast
Of Unleavened Bread,
Chapter 14
"The Cross and It's Shadow"
by Stephen Haskell

"The whole Jewish economy is a compacted prophecy of the gospel," and every service commanded by God in the Jewish economy was either a shadow of the service of our High priest in the heavenly sanctuary, or of the service enjoined upon the earthly congregation for whom he is officiating. Therefore there was a special significance attached to the fact that for centuries the day following the Passover was kept as a Sabbath.

In the previous chapter we have shown that it was not by chance that in the year the Saviour was crucified the Passover came on Friday, the sixth day of the week. Neither was it by chance that the ceremonial Sabbath, the fifteenth day of Abib, came upon the seventh-day Sabbath of the Lord. It was type meeting antitype. The beloved disciple John said, "That Sabbath was a high day," (John 19:31) which term was used whenever the ceremonial annual Sabbath came upon the weekly Sabbath of the Lord.

Four thousand years before, on the first sixth day of time, God and Christ finished the work of creation. God pronounced the finished work very good, and "He rested on the seventh day from all His work which He had made. And God blessed the seventh day, and sanctified it:because that in it He had rested from all His work which God created and made." (Gen. 2:2,3) About twenty-five hundred years later, God, amid the awful grandeur of Sinai, commanded His people to "remember the Sabbath day to keep it holy;" (Exo. 20:1-17) for upon that day–the seventh day –He rested from the work of creation.

It was a mighty work to speak this world into existence, to clothe it with verdure and beauty, to supply it with animal life, to people it with human beings made in the image of God; but it is a far greater work to take the earth marred by sin, its inhabitants sunken in iniquity, and re-create them, bringing them really to a higher state of perfection than when they first came from the hand of the Creator. This is the work undertaken by the Son of God; and when He cried upon Calvary, "It is finished," He spoke to the Father, announcing the fact that He had complied with the requirements of the law, He had lived a sinless life, had shed His blood as a ransom for the world, and now the way was opened whereby every son and daughter of Adam could be saved if they would accept the offered pardon.

As the westering sun was heralding to the world the approach of the holy Sabbath of the Lord, from the cross on Calvary the Son of God proclaimed the work of redemption finished. That work was to affect the entire creation, and although wicked men understood not the meaning of those mystic words, "It is finished," all nature responded, and, as it were, leaped for joy; even the solid rocks were rent asunder. God designed that this stupendous event should be recognized by humanity; and as those living and even gazing upon the scene were unconscious of its significance, sleeping saints were awakened from their graves to proclaim the glad news. (Matt. 27:50-53)

The work of redemption was completed on the sixth day, and as God rested after the work of creation, so Jesus rested in Joseph's tomb during the sacred hours of that holy Sabbath. His followers rested also; for He had ever taught them obedience to His Father's holy law. He had forbidden any ever to think that even a jot or tittle of the law of God could be changed. (Matt. 5:17,18) For four thousand years the Sabbath had been observed as a memorial of creation; but after the Saviour died upon the cross it was doubly blessed, being a memorial of redemption as well as of creation.

The Sabbath, like a great bridge, spans all time.

The first pier upholding this great institution was placed in Eden, when, according to the account given in Gen. 2:2, 3, God and unfallen man rested through the sacred hours of the Sabbath.
The second pier of the bridge was founded amid the thunders of Sinai, when God, in proclaiming the fourth commandment as found in Ex. 20:8-11, gave the fact that He had rested upon the seventh day from the work of creation, as the reason why man should keep it holy.

The third pier of the Sabbath bridge was hallowed by the blood of Calvary. While the Son of the mighty God rested in the tomb from the work of redemption, it is recorded in Luke 23:54-56 that Jesus' followers "rested on the Sabbath day according to the commandment." The fourth pier of this wonderful bridge will be laid in the earth made new. In Isa. 63:22, 23, we are told that after the last trace of the curse of sin is removed from the earth, all flesh will from Sabbath to Sabbath come to worship before the Lord. As long as the new heavens and the new earth remain, so long will the redeemed of the Lord love to commemorate the Sabbath as a memorial of the finished work of Christ in the redemption of this fallen world, as well as a memorial of its creation.

The second day of the Feast of Unleavened Bread was the offering of first-fruits. This was a very important service, and will be dwelt upon separately from the rest of the feast. During the seven days following the Passover, the people ate unleavened bread. Seven, denoting a complete number, was a fitting type of the life that should be lived by the one who claims Christ as his Passover, and has the blessed assurance that his sins are covered by the blood of the Saviour. Leaven is a type of "malice and wickedness"; unleavened bread represents "sincerity and truth." He whose past sins are hidden, (Romans 4:7,8) and who realizes what it is to have the condemnation of his old life lifted from him, enters into a new life, and should not return to his life of sin, but live in all "sincerity and truth." All this was symbolized by the seven days' Feast of Unleavened Bread, following the Passover.

"The Cross and Its Shadow" Chapter 14, pp. 103-107
Stephen Haskell was first introduced to Sabbath keeping Adventist in 1853 at the age of 22. He served as an Adventist evangelist, church administrator, missionary, writer, and Bible teacher over the next 67 years.
Stephen Haskell--Table of Contents to His book "Cross and It's Shadow" 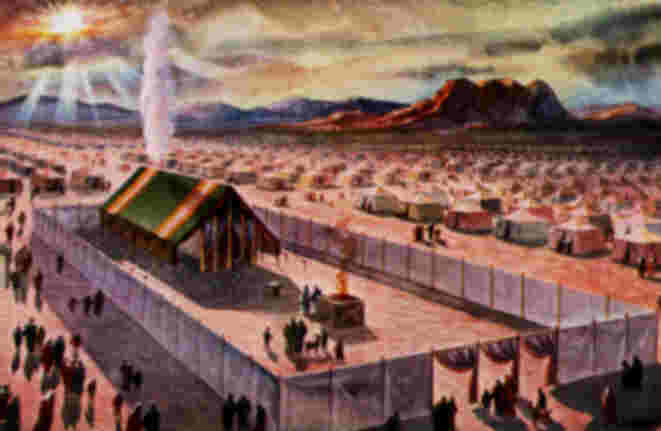