Welcome!
Close
Would you like to make this site your homepage? It's fast and easy...
Yes, Please make this my home page!
No Thanks
Don't show this to me again.
Close
THE FEAST OF TRUMPETS
Chapter 28 in "The Cross and It's Shadow" by Stephen Haskell The Feast Of Trumpets 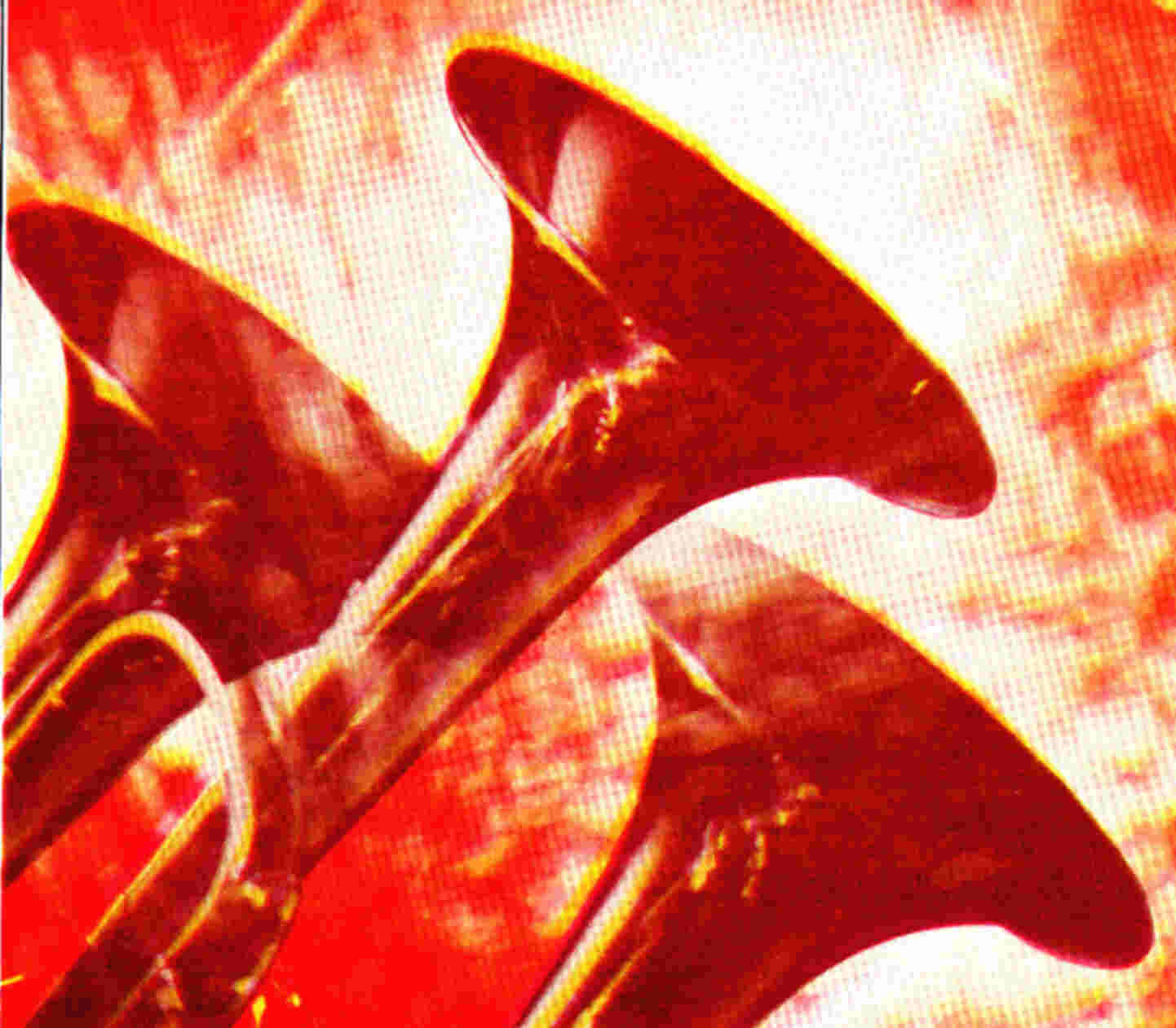 THE trumpet was not only used as a musical instrument among the ancient Israelites, but it also filled an important place in their religious and civil ceremonies. It was associated with the entire life of the children of Israel. It was used on their joyful days and on their solemn days; and at the beginning of every month it was sounded over their burnt-offerings and their peace-offerings. It was to be a reminder to the Israelites of the Lord their God. (Num.10:10)

In obedience to the command of God, Moses made two silver trumpets to be used in calling their assemblies and in regulating the journeyings of the children of Israel. (Num. 10:2) When the priests blew both the trumpets, all the people were to assemble at the door of the tabernacle; if one trumpet sounded, only the princes responded. (Numbers 10:2-8)

The call for summoning to the religious assemblies was different from the sound of an alarm, which was blown to gather the army for war. God promised that when they blew the alarm for war, they should "be remembered before the Lord," and should be saved from their enemies. Numbers 10:9)

In the time of Solomon, great skill was shown in the blowing of trumpets, so that the notes from one hundred and twenty trumpets came forth as "one sound." (1 Chron 5:12)

When God wished to gather the hosts of Israel at the base of Mt. Sinai to listen to the proclamation of His holy law, from the midst of the glory of the Lord that covered the mountain, "the voice of the trumpet exceeding loud" was heard, and the people trembled; and as the "voice of the trumpet sounded long, and waxed louder and louder," even Moses, that holy man of God, said, "I exceedingly fear and quake." (Ex. 19:16,19; Hebs 12:21)

God designed that every blast of the trumpet blown by His people, whether for joy or for sorrow, for worship or for war, should be a memorial, or reminder, of the power of God to comfort, sustain, and protect His people; "that they may be to you," He said, "for a memorial before your God:I am the Lord your God." (Num. 10:10)

Every child of God having full faith in the promises, who went forward and blew the trumpets in obedience to God's. command, beheld the deliverance of the Lord, whether confronted by obstacles as high as the walls of Jericho, Josh. 6:4,5) or by enemies as numerous as the hosts of Midian. (Judges 17:19-23)

While the sound of the trumpet was often heard by the children of Israel, yet there was one day in each year especially set aside for the purpose of blowing the trumpets. Of this day the Lord said:"In the seventh month, on the first day of the month, ye shall have a holy convocation; ye shall do no servile work:it is a day of blowing the trumpets unto you."

It is quite evident that, like the Passover, the Feast of Trumpets was both commemorative and typical. It came ten days before the day of atonement, the type of the great investigative judgment which opened in 1844, at the end of the long prophetic period of the twenty-three hundred years of Dan. 8:14.

In the type the trumpets were blown throughout Israel, warning all of the near approach of the solemn day of atonement. In the antitype we should expect some world-wide message to be given in trumpet tones, announcing the time near when the great antitypical day of atonement, the investigative judgment, would convene in the heavens, (Dan. 7:9,10) Beginning with the years 1833-34 and extending down to 1844, such a message was given to the world in trumpet tones, announcing, "The hour of His judgment is come." (Rev. 14:6,7)

William Miller and others, in their study of the declaration in Dan. 8:14, "Unto two thousand and three hundred days; then shall the sanctuary be cleansed," found that this long prophetic period would end in 1844. They failed to connect this text with the ancient typical sanctuary, but applied the term "sanctuary" to this earth, and taught that in 1844 Christ would come to the earth to cleanse it and judge the people.

William Miller was joined by hundreds of other ministers in America, who proclaimed this message with great power. Edward Irving, with many other consecrated men, preached the same in England; while Joseph Wolff and others heralded it in Asia and other portions of the world.

During the ten years preceding the tenth day of the seventh month (Jewish time) in 1844, every civilized nation on the earth heard in trumpet tones the announcement of the message of Rev. 14:6, 7, "The hour of His judgment is come." This message was due at this period of the world's history. Paul in his day preached of a "judgment to come," (Acts 24:25) but the burden of the message given during these years was, "the hour of His judgment is come."

The fact that the men who proclaimed this message misunderstood the full import of it, did not prevent their fulfilling the antitype of the ancient type. When the followers of Christ cried before Him, "Blessed be the King that cometh in the name of the Lord," (Luke 19:35-40) and spread palm branches in the way, believing that Jesus was entering Jerusalem to take the earthly kingdom, they fulfilled the prophecy of Zech. 9:9. If they had known that in a few days their Lord would hang upon the accursed tree, (Gal. 3:13) they could not have fulfilled the prophecy; for it would have been impossible for them to "rejoice greatly."

In like manner the message due to the world between 1834 and 1844 could never have been given with the power and joyfulness demanded to fulfil the antitype, if those giving it had understood that the Saviour, instead of coming to this earth, was to enter the most holy apartment of the heavenly sanctuary, and begin the work of the investigative judgment.

God hid from their eyes the fact that there were two other messages to be given to the world before the Lord should come to the earth in power and glory; (Rev. 14:6-14) that He could not come until they had fulfilled the antitype. Then to comfort them in their disappointment, He allowed them by faith to look within the heavenly sanctuary, (Rev. 11:19) and catch a glimpse of the work of their great High Priest officiating for them.

The prophet Joel evidently connected the closing work of the gospel on earth with the blowing of the trumpets, for he writes as follows:"Blowye the trumpet in Zion, and sound an alarm in My holy mountain:let all the inhabitants of the land tremble:for the day of the Lord cometh, for it is nigh at hand." (Joel 2:1) The sound of trumpets was heard many times in the past, from the trumpet of the Lord's host upon Mt. Sinai, when the whole earth shook, (Heb. 12:16) to the blast of the rams' horns before the walls of Jericho.

The time is coming when me trumpet of the Lord will again be heard by mortals, when its notes will "shake not the earth only, but also heaven." (Heb. 12:26) The clear notes of that trumpet will penetrate the deepest recesses of the earth; and, just as anciently the trumpet summoned all Israel to appear before the Lord, so every child of God sleeping in the earth will answer the trumpet call, and come forth to meet his Lord. In old ocean's caverns the clarion tones will be heard, and the sea, obedient to the call, will give up the dead that are in it. (Rev. 20:13) The whole earth will resound with the tread of the innumerable company of the redeemed, as the living and the resurrected saints gather to meet their Lord in answer to the welcome summons of the last trumpet call that will be given on this sin cursed earth, (1 Cor. 15:51,52; 1 Thess. 4:16,17)

Then all the discordant notes will forever cease, and the redeemed will hear the Saviour say, "Come, ye blessed of My Father, inherit the kingdom prepared for you from the foundation of the world." (Matt. 25:34)

In the ancient typical service, as the people of God met for worship at the beginning of each month and upon the Sabbath, in obedience to the clear notes of the silver trumpets; in like manner we can imagine that when the earth is made new, and "from one new moon to another and from one Sabbath to another" (Isa. 66:2,23) the redeemed assemble to worship before the Lord, it will be in response to the notes of the heavenly trumpets, of which those used in the ancient service were a type.

"The Cross and Its Shadow" Chapter 28, pp. 2201-208
Stephen Haskell was first introduced to Sabbath keeping Adventist in 1853 at the age of 22. He served as an Adventist evangelist, church administrator, missionary, writer, and Bible teacher over the next 67 years.