Welcome!
Close
Would you like to make this site your homepage? It's fast and easy...
Yes, Please make this my home page!
No Thanks
Don't show this to me again.
Close
THE FEAST OF TABERNACLES
Chapter 32 in "The Cross and It's Shadow" by Stephen Haskell

THE Feast of Tabernacles was the last feast in the yearly round of service, and typified the final consummation of the entire plan of redemption. It began on the fifteenth day of the seventh month, when the harvests were all gathered from field, vineyard, and olive groves. As the time approached, from all parts of Palestine, groups of devout Jews might be seen wending their way to Jerusalem. And not only from the Holy Land, but believing Jews from all the surrounding countries went up to Jerusalem to attend the Feast of Tabernacles. The Lord required all the men to attend this feast, but many of the women and children went also. (Ex. 23:16,17)

It was a time of great rejoicing. All were expected to bring a thank-offering to the Lord. Burnt-offerings, meat-offerings, and drink-offerings were presented at this time. (Lev. 23:37) The Feast of Tabernacles began five days after the day of atonement, and all Israel were rejoicing in their acceptance with God, and also for the bounties of the harvest which had been gathered. The feast continued seven days, the first and the eighth days being observed as ceremonial Sabbaths. (Lev. 23:36,39)

This feast was commemorative as well as typical. It commemorated their desert wanderings; and in remembrance of their tent homes, all Israel dwelt in booths during the seven days. In the streets, on the housetops, in their courts, and in the courts of the house of God, booths were made of "boughs of goodly trees, branches of palm-trees, and the boughs of thick trees, and willows of the brook." (Lev. 23:40-43 Neh. 8:15,16)

It was a period of rejoicing, and all were to share the feast with the Levites, the poor and the stranger. (Duet. 16:13-17)

Every seventh year "the solemnity of the year of release" came during the Feast of Tabernacles, when debtors were released from their obligations. (Duet. 31:10:15:1-4) At this time the entire Levitical law was read in the hearing of all; men, women, and children; and even the strangers within their gates, were required to listen to the reading of the law. (Duet. 31:11-13)

The first new year began in the autumn, for at creation, time began with fruit-trees laden with fruit all ready to furnish food for man. (Gen. 1:29; 2:5) The Feast of Tabernacles, or Feast of Ingathering, as it was also called, was held in the "year's end," or the "revolution of the year." (Ex. 34:22 margin) The civil year of the Jewish calendar always ended in the autumn, but the sacred year began in the springtime; hence the Feast of Tabernacles was held in the seventh month of the sacred year.

Some very interesting Bible scenes are connected with this feast. Solomon's temple was dedicated at the Feast of Tabernacles. (1 Kings 8:2,65)

When Israel returned from the Babylonian captivity, this was the first feast celebrated after the wall of Jerusalem was restored, and was a time of great rejoicing. (Neh. 7:73; 8:17,18) 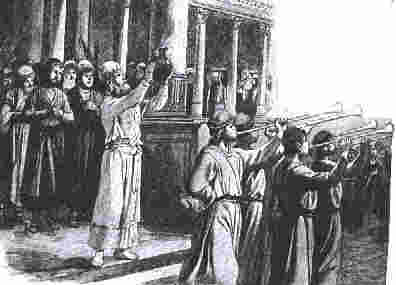 At this time the children of Israel not only commemorated their tent life by living in booths, but the temple was especially illuminated in remembrance of the pillar of fire that guided them in their wanderings; and on the last day of the feast a beautiful service, the crowning service of "the last day, that great day of the feast," commemorated the miraculous supply of water in the desert. (John 7:37) The priest dipped a flagon of water from the Kedron, and bearing it aloft, meanwhile marching to the sound of music and chanting portions of the one hundred twenty-second psalm, he entered the temple court. By the altar were two silver basins, and as the priest poured the water into one basin, another priest poured a flagon of wine into the other basin; and the wine and water, mingling together, flowed through a pipe back to the Kedron.

Many incidents in Christ's life cluster around the last Feast of Tabernacles which He attended. It was on the day of this service that He stood in the temple court and cried, "If any man thirst, let him come unto Me, and drink." (John 7:37-39) It was Christ who led them by the pillar of cloud; He it was who supplied the water from the rock. "They drank of that spiritual Rock that went with them:and that Rock was Christ." (1 Cor. 10:4 margin) He, the great Lifegiver, was in their midst; yet even while celebrating His power to quench their thirst, they were ready to kill Him.

While this feast commemorated the journeying of Israel in the wilderness, it also commemorated their deliverance from Egyptian bondage. It would be well if every one who has been delivered from the darkness of sin would occasionally celebrate his deliverance by recognizing the leadings of the Lord in the journey of his life, and thank Him for the many blessings received.

The Feast of Tabernacles followed the day of atonement, which meets its antitype in the judgment; hence must typify an event which comes after the close of the judgment. When Christ leaves the heavenly sanctuary, it will be but a short time until He comes to the earth to gather His people. Then He will take them to heaven, where they will behold the glory He had with the Father before the world was. (John 17:5,24)

For one thousand years the saints will reign with Christ in heaven (Rev. 20:4) before they return to their eternal home,–this earth, freed from every curse. The New Jerusalem with its gates of pearl and streets of gold, will be the metropolis of the glorious abode of the redeemed. The beauties of the new earth are such that the redeemed in heaven, surrounded by the glories of the throne of the Eternal, will look forward with joyful anticipation to the time when they shall "reign on the earth." (Rev. 5:9,10)

As we journey through this wilderness of sin and sorrow, it is our blessed privilege by faith to watch the movements of our High Priest, and be ready to greet with joy His appearance when He comes to take His faithful ones to sojourn with Him for a time in the heavenly courts, before they share in the eternal bliss of the earth made new. Every feast, as well as every offering and service, in the Levitical ceremonies, pointed to the beautiful home of the redeemed. Each one is a guideboard on the great pathway of life, pointing toward the heavenly home.

The Jews failed to read these guideboards aright, and to-day are wandering over the earth without the light from the blessed Messiah and the cross of Calvary shining upon their pathway. Let us take warning by their failure, and not make the same fatal mistake by failing to discern the light still reflected from types and symbols, for they are all illuminated by the light of the cross. Each one reveals some special trait in the wonderful character of our Redeemer.

The entire system of Judaism was the gospel. True, it was veiled in types and symbols, but the light from Calvary illuminates the entire Jewish economy; and the one who will study it in the light of the cross, will gain such an intimate acquaintance with Him who is the Antitype of every service, that by beholding they will become changed into His image, from glory to glory. (2 Cor. 3:18)

The typical service shines the brightest when placed by the side of the Antitype. A study of any part of the Levitical system points to some characteristic in the life of Christ; while a study of the entire system of Judaism more nearly reveals the fullness of His character than any other portions of the Scriptures. The entire Bible is full of it.

Every Bible writer refers to the Levitical service to illustrate divine truth; and the person who is familiar with the entire sanctuary service, not only receives a blessing from the study, but also understands more fully other portions of the Sacred Book, for the different feasts and sacrifices are referred to frequently all through the Bible.

"The Cross and Its Shadow" Chapter 32, pp. 239-244
Stephen Haskell was first introduced to Sabbath keeping Adventist in 1853 at the age of 22. He served as an Adventist evangelist, church administrator, missionary, writer, and Bible teacher over the next 67 years.