Welcome!
Close
Would you like to make this site your homepage? It's fast and easy...
Yes, Please make this my home page!
No Thanks
Don't show this to me again.
Close
The Priests
Cross and Its Shadow

Chapter 10, The Priests
Chapter 11, The Levites
Chapter 12, Garments of the Priests
THE PRIESTS 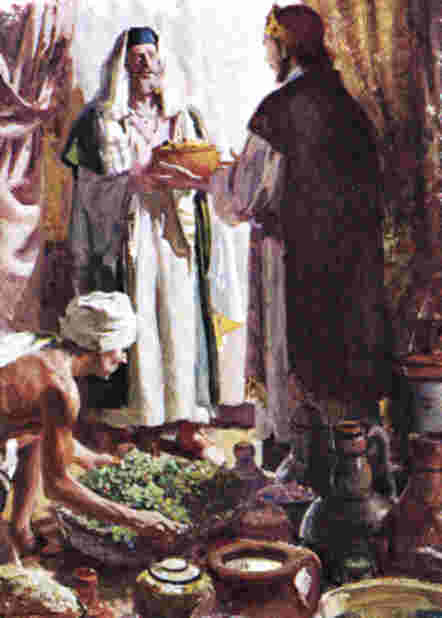 The Levitical priesthood was divided into twenty-four courses, (1 Chron. 24:1-19; 2 Chron. 8:14) Each course had its chief or governor of the sanctuary. (1 Chron. 24:6,31) This continued down to the time of Christ. (Luke 1:8) When the Saviour ascended to heaven, He led a multitude of captives; (Ephes 4:8 marg.) and when John in vision was shown the first apartment of the heavenly sanctuary, with its seven lamps of fire burning before the throne of God, he saw four and twenty elders seated upon four and twenty seats, and they worshiped the Lamb, saying, "Thou hast redeemed us to God by Thy blood out of every kindred, and tongue, and people, and nation; and hast made us unto our God kings and priests." (Rev. 4:4; 5:8-10)

In this we see the antitype of the twenty-four courses of priests. The chiefs, or elders, of each course have seats of honor, and they are kings and priests after the order of Melchizedek. Thee remainder of the multitude Christ took into heaven are not mentioned, but it is reasonable to suppose that they constitute the courses of which the four and twenty elders are the chiefs.

Only the descendants of Aaron were allowed to serve as priests, (Numbers 3:10) In the type the priest who could not prove his genealogy direct from Aaron, the first high priest, was cast out of the priesthood; (Ezra 2:26) so in the antitype, the Christian who can not prove his direct connection with Christ, the heavenly High Priest, will never become one of the "royal priesthood." (1 Peter 2:9; Rev. 20:15)

God has provided for the support of all the different orders of the priesthood by the same method. "The earth is the Lord's, and the fullness thereof." (Ps. 24:1) The silver and the gold and the cattle upon a thousand hills all belong to Him. (Ps. 50:10-12) Man is placed as steward over the Lord's heritage, and the Lord claims one tenth of everything on the earth as His portion. "All the tithe of the land, whether of the seed of the land, or of the fruit of the tree, is the Lord's:it is holy unto the Lord." (Lev. 27:30-33)

Of the tithe the Lord says, "I have given the children of Levi all the tenth in Israel for an inheritance, for their service which they serve, even the service of the tabernacle of the congregation." (Numbers 18:20-24)

The individual who selfishly uses the entire ten portions for himself, not reserving one tenth for the Lord, is guilty of robbing the Lord. "Will Lord Will a man rob God? Yet ye have robbed Me. But ye say, Wherein have we robbed Theme? In tithes and offerings." (Mal. 3:8-11)

Abraham paid a faithful tithe to Melchizedek; (Gen. 14:17-20) and Jacob promised to pay tithe of all, even if he received only food and raiment. (Gen. 28:20-22) Those who belong to the great household of faith and are children of Abraham, will "do the works of Abraham." (John 8:39) They will pay a faithful tithe for the support of those who, like the Levitical priests, give their lives for the advancement of Christ's kingdom upon the earth. Just as the priest lived "of the things of the temple, . . . even so hath the Lord ordained that they which preach the gospel should live of the gospel." (1 Cor 9:9-14) 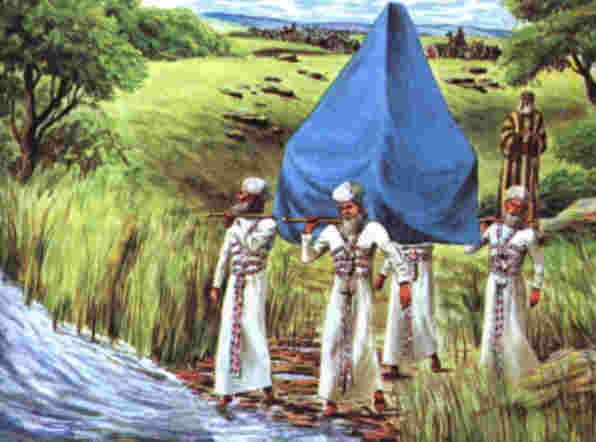 ONE entire tribe of Israel was set apart for the service of the sanctuary. As we recall the last words spoken to Levi by his father Jacob as he lay on his death-bed, we might wonder that his descendants were chosen for that sacred work. When Jacob remembered the sins of Levi, he pronounced almost a curse instead of a blessing upon his son, and closed it with these words:"I will divide them in Jacob, and scatter them in Israel." (Gen. 49:5-7)

Wondrous is the love of our God that can change a curse into a blessing. (Neh. 13:2) Only a mighty God can make scarlet sins as white as snow. (Isa. 1:18)

The fearless character which, under the control of Satan, led Levi to murder the Shechemites, when controlled by the grace of God, enabled his descendants to take their stand boldly on the Lord's side when the mass of Israel went into idolatry. (Ex. 32:26-29) God then turned the curse into a blessing; He said because they had observed His law and kept His covenant, they should "teach Jacob His judgments and Israel His law." (Duet. 33:8-11)

In order that their influence for good might be more widely felt throughout Israel, the Lord, instead of giving them one portion of the land for their inheritance, as He had given the other tribes, appointed as their portion forty-eight cities scattered among all the tribes, (Number 18:20; 35:1-8) Truly they were divided in Jacob and scattered in Israel, but the curse was turned into a blessing.

Our God is "the same yesterday, and to-day, and forever." (Heb. 13:8) When He pronounces evil against a nation or an individual because of their wickedness, if they turn from their wrong-doing, God says He "will repent of the evil" He "thought to do unto them," and as in the case of Levi, a blessing will come instead of the curse. (Jer. 18:7-10)

The term "Levite" was applied to all the priests, but only the descendants of Aaron were to hold the sacred office. The remainder of the tribe were to do the, service of the sanctuary under the direction of the priests. They were not allowed to officiate at the altar of burnt-offering, nor to burn incense, nor to do any of the priest's work within the veil. The Levites were to serve, or minister to, the priests; but the priests were to minister for the people before the Lord. (Num. 18:1-7)

The Levites were consecrated to the work of the sanctuary by the laying on of hands by the whole assembly of Israel, and then Aaron offered them "before the Lord for an offering of the children of Israel." (Num. 8:9-14)

The Levites were chosen by the Lord instead of the firstborn of Israel. (Num. 8:17,18) While journeying in the wilderness, they carried all that pertained to the tabernacle; but although they bore the sacred furniture, they were never permitted even to look upon it. (Num. 4:20)

After the temple was built, the Levites were assigned the work of waiting on the priests in the sanctuary service. They prepared the showbread, often led the singing, collected the tithe, and did a large amount of work in connection with the service of the Lord. (1 Chr. 23:24-32)

In the time of David the Levites began to serve in the sanctuary at the age of twenty-five. At fifty years of age they were to "return from the warfare of the service." (Num. 8:23-26) They were not discharged; they still had an oversight of the work, but were not expected to perform arduous duties.

GARMENTS OF THE PRIESTS 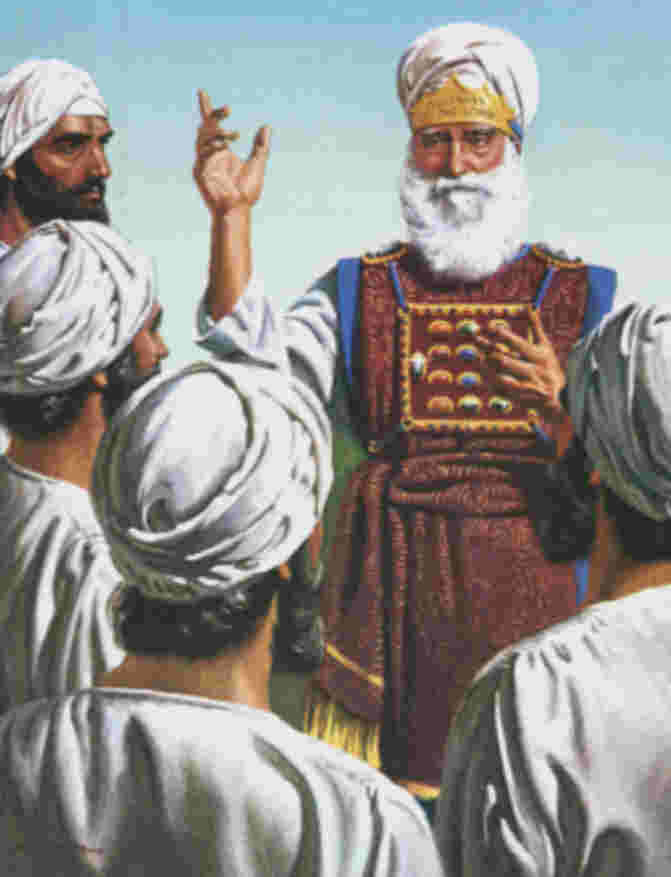 THE garments worn by the ordinary priests were of white linen, a fit emblem of the Spotless One of whom their ministry was a type The outer robe was white woven in one piece, and extended nearly to the feet. It was confined at the waist with a white linen girdle, embroidered in blue, purple, and scarlet. A white linen miter or turban, covered the head. These articles, with the linen breeches which were worn by all officiating priests, completed the costume of the common priest. These garments of white linen were made for "glory and for beauty." (Ex. 28:40-42)

Only the family of Aaron could wear the rich garments of the priest; but there are robes of "fine linen, clean and white," in store for every overcomer, (Rev. 19:8) Even in this life, Christ clothes His faithful ones with "the garments of salvation" and "the robe of righteousness." (Isa. 61:10)

The pure white garments were worn by the high priest on ordinary occasions, but when he entered the most holy place to make atonement for the people, he was clad in gorgeous robes, which fitly represented our High Priest as He confesses the names of His people before the judgment-seat of the Judge of the whole earth.

The high priest always wore the long white linen robe of the common priest, but over this was a robe of blue woven in one piece, and beautifully ornamented around the skirt with golden bells and pomegranates of blue, purple, and gold. The ephod, a sleeveless garment of white linen, beautifully embroidered in gold, blue, purple, and scarlet, was worn over the blue robe. This was shorter than the other garments, and was confined at the waist by a richly embroidered girdle of the same color.

On the gold embroidered shoulders of the ephod were two onyx stones, on which were engraved the names of the twelve tribes of Israel, six names on each shoulder, thus typifying the Mighty One who bears the perplexities and burdens of His people upon His shoulders. (Isa. 9:6)

While the robe of blue with its golden bells and the handsomely embroidered ephod were beautiful, yet the crowning feature in all the gorgeous dress of the high priest was the breastplate worn over his heart as he officiated in the holy of holies before the Lord. The breastplate was of the same material as the ephod. It was in the form of a square and measured a span. In it were set in gold twelve precious stones, arranged three in a row. On each stone was engraved the name of one of the tribes of Israel. Around these was a border of a variety of stones. The stones in the breastplate were the same as those that form the foundation of the New Jerusalem. (Ex. 28:2-39) The breastplate hung from the shoulders of the ephod and was fastened at the waist by a blue cord through gold rings.

Set in the breastplate, one on either side, were two brilliant stones, called the Urim and Thummim. By means of these stones the mind of the Lord could be ascertained by the high priest. When questions were asked, if light encircled the precious stone at the right, the answer was in the affirmative; but if a shadow rested on the stone at the left, the answer was negative. The breastplate being attached to the ephod, David, in calling for the priest to bring the ephod when he was undecided as to what course to pursue, was really asking for the breastplate, by which he might know the mind of the Lord. (1 Sam. 23:9-12)

There was one other article belonging to the high priest's garments,–the miter, or bonnet, (Ex. 28:36,37) A gold plate bearing the inscription, "Holiness to Jehovah," was fastened by a blue lace to the front of the white bonnet, or turban, worn by the priests.

No priest was allowed to wear the priestly garments except when officiating in the sanctuary or court. (Eze 44:19)

There is a touching significance in the high priest's wearing the names of all Israel on his shoulders and over his heart as he performed the work which typified the judgment, when the case of every one will come up in review before God. The breastplate was called "the breastplate of judgment." (Ex. 28:15) Those names engraved on the stones were a type of the names of the overcomers, which Christ will confess before His father and the angels. Stone is an enduring substance, but far more enduring is the book of life, where the names which Christ has confessed, are written to remain forever, (Rev. 3:5)