Welcome!
Close
Would you like to make this site your homepage? It's fast and easy...
Yes, Please make this my home page!
No Thanks
Don't show this to me again.
Close
PENTECOST
Chapter 16 in "The Cross and It's Shadow" by Stephen Haskell
PENTECOST, so called because it was held fifty days after the waving of first-fruits, (Lev. 23:16) was the last of the annual feasts held in the first half of the year. (Acts 2:1) This feast was called the Feast of Weeks, on account of seven weeks intervening between it and the Passover feast. (Duet. 16:9,10) It was also called the Feast of Harvest, as it came at the close of the harvest. (Ex. 23:14-16) The Feast of Weeks was one of the three principal annual feasts, when all the men of Israel were required to appear before the Lord in Jerusalem.

As the children of Israel journeyed toward Jerusalem to attend this feast, on all sides could be seen the stubble from which had been gathered the ripened grain that lay all ready to be trodden out upon the threshing-floors. At the time of the Passover feast there was uncertainty in regard to the coming harvest, as drought or storm might blight it before it was gathered; but now there was no uncertainty. The fruit of the harvest was in their possession, to be used for their pleasure and the advancement of the work of the Lord. And none were to appear before the Lord empty. They were not simply to bring a few heads of grain, as in the springtime; but they were to bring a freewill-offering according as the Lord had blessed them. (Duet. 16:10)

This feast was sometimes called the Day of the First-fruits (Num. 28:26) because the children of Israel were expected to make liberal offerings to the Lord at this time. It was a season of great rejoicing for the entire family, in which the Levites and the poor and afflicted were to join.

The services of the Feast of Weeks, or Pentecost, occupied but one day. Many offerings were presented at the temple, among them two loaves of leavened bread, which were waved before the Lord. The Feast of Weeks was observed as an annual Sabbath, and was a holy convocation. (Lev. 23:15-21)

When Christ ascended from the earth, He bade His disciples teach all nations. They were to carry the gospel to the entire world. The disciples saw only a mere handful of believers as the result of Christ's three years of toil and sacrifice. But when Pentecost had fully come, or in other words, when the seed which the Son of God Himself had sown during those three and a half years of weary toil, had sprung up, then came the harvest. (Acts 2:41)

The disciples were ignorant of the results of the Saviour's life, work, and sacrifice upon the minds of the people. In explaining to them the parable of the tares and the wheat, Christ had said, "He that soweth the good seed is the Son of man," but they comprehended it not. As the Saviour went from city to hamlet, He was constantly sowing the "good seed." The harvest of souls gathered from this seed was to be presented at the antitypical Feast of Harvest. For centuries the children of Israel had celebrated this feast, bringing offerings from their harvest of grain. Of each one God had said, At the Feast of Harvest thou shalt present "the first-fruits of thy, labors, which thou hast sown in the field." (Ex. 23:16) The antitype came when the Son of man presented "the first-fruits" of His labor, which He had sown in the field.

There was a work for the disciples to do in order that they might be ready for the great antitypical Feast of Harvest. They needed to study the Scriptures, to put aside every difference, and become of one accord, that they might receive the outpouring of the Holy Spirit, which would enable them to know how to care for the great harvest of three thousand souls that was awaiting them as the result of the Saviour's ministry.

They also needed this special outpouring of the Spirit to prepare them to carry forward the wonderful work begun on the day of Pentecost, until every creature under heaven should hear the glad news of salvation. (Acts 1:14-26) 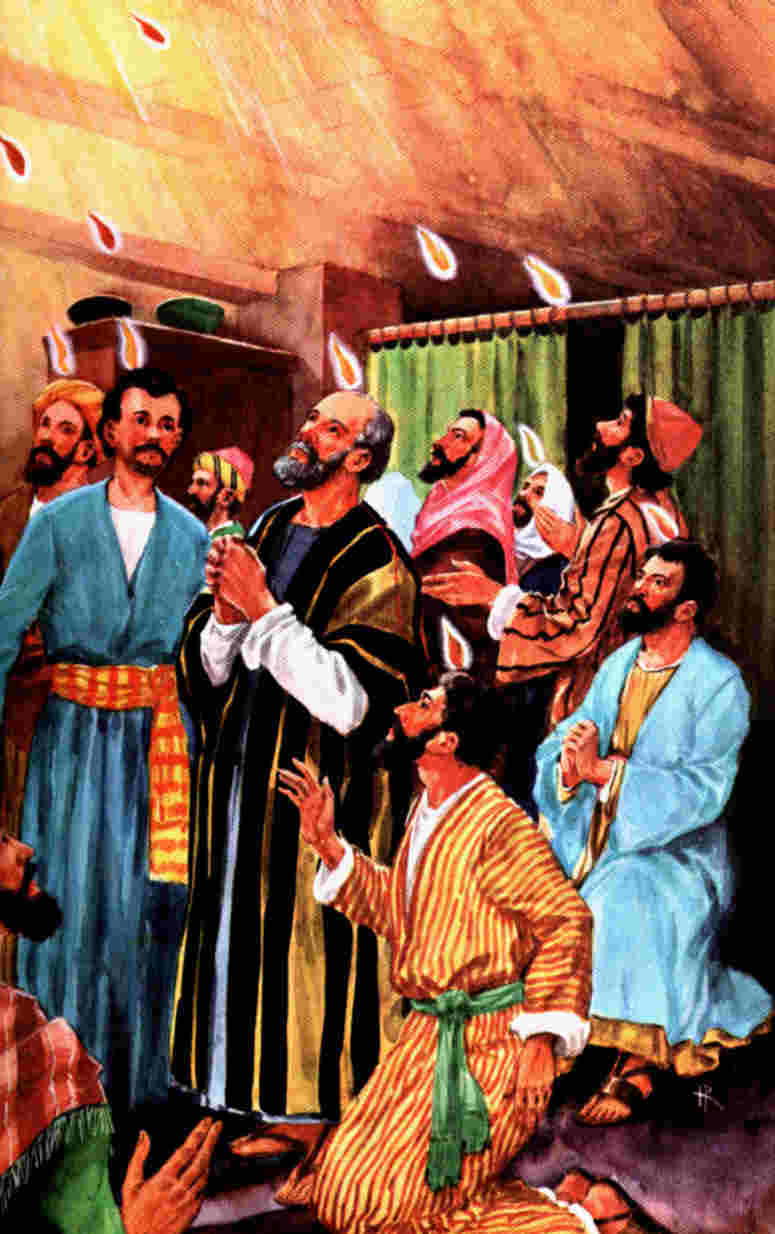 In Palestine there was an early rain and a latter rain, which came in time to ripen the harvest. The prophet Joel, in speaking of the work of God in the last days, uses the terms "former" and "latter rain" to represent the outpouring of God's Spirit. And in the following words he gives the assurance that in the closing work of the gospel in the earth God will again pour out His Spirit:"He hath given you the former rain moderately, and He will cause to come down for you the rain, the former rain, and the latter rain, . . and the floors shall be full of wheat." (Joel 2:23,24) This great harvest of souls at the antitypical Feast of Harvest was only a beginning of the greater harvest that will be gathered before the end of the world.

In the type the children of Israel brought liberal offerings to the Lord at the Feast of Harvest. Those who entered into the spirit of the antitypical Feast of Harvest, or Pentecost, "sold their possessions and goods," and gave the proceeds to help in carrying forward the work of the Lord. These offerings enabled the disciples to extend the work rapidly, so that within about thirty-four years they could say that every creature under heaven had heard the gospel. (Col. 1:23) Those who enter into the spirit of the latter rain will, like the early disciples, lay all upon the altar to be used by the Lord in the great closing work.

As the seed sown by the Son of man during His earthly ministry brought a harvest of souls at Pentecost, or the early rain, so the good seed sown by Christ's ambassadors who faithfully scatter the printed page filled, with the gospel message, and by voice and life teach the saving truth, will yield a bountiful harvest in the time of the latter rain, when God's Spirit is poured out upon all flesh. Then will be gathered the fruit of what each one has sown in the field. "He which soweth sparingly shall reap also sparingly, and he which soweth bountifully shall reap bountifully," (2 Cor. 9:6) is the divine promise.

"The Cross and Its Shadow" Chapter 28, pp. 2201-208
Stephen Haskell was first introduced to Sabbath keeping Adventist in 1853 at the age of 22. He served as an Adventist evangelist, church administrator, missionary, writer, and Bible teacher over the next 67 years.