Welcome!
Close
Would you like to make this site your homepage? It's fast and easy...
Yes, Please make this my home page!
No Thanks
Don't show this to me again.
Close
The Offering of the First Fruits
Chapter 15
"The Cross and It's Shadow"
by Stephen Haskell 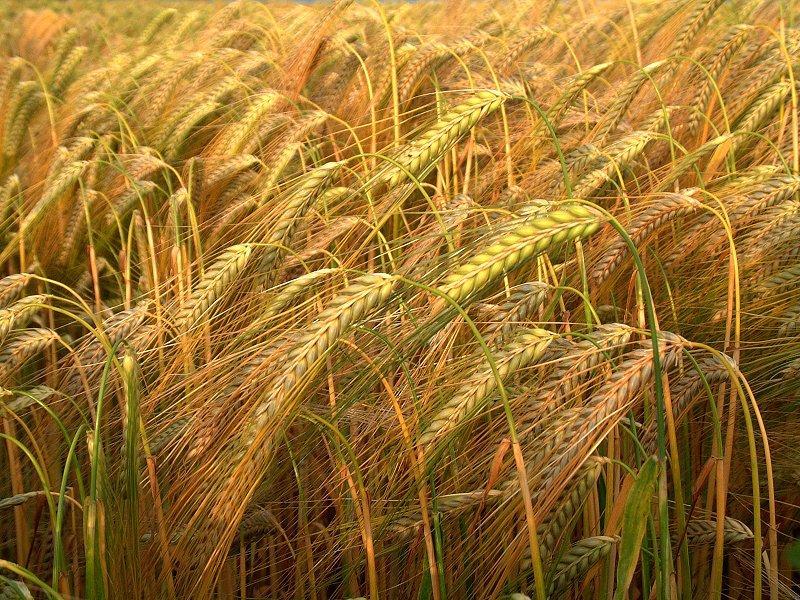 WHEN the waving fields of golden grain proclaimed that the time of harvest had come, the service of offering the first-fruits before the Lord was performed in the temple.

As the children of Israel journeyed toward Jerusalem to attend the Passover, on every side could be seen fields of yellow barley, the heads heavy with ripened grain bending in the breeze. But not a sickle could be put into the grain, or even kernels gathered to be eaten until the first-fruits had been presented before the Lord.

It was a beautiful service. The priest clad in his sacred robes, with a handful of yellow heads of ripened grain, entered the temple. The glow of burnished gold from walls and furniture blended with the tints of the golden heads of grain. The priest paused in front of the golden altar, and waved the grain before the Lord. Those first heads were a pledge of the bountiful harvest to be gathered, and the waving indicated thanksgiving and praise to the Lord of the harvest.

The waving of the first-fruits was the principal service of the day, but a lamb was also offered as a burnt-offering. No portion of the first-fruits were ever burned in the fire, for they were a type of resurrected beings clad in immortality, nevermore subject to death or decay. 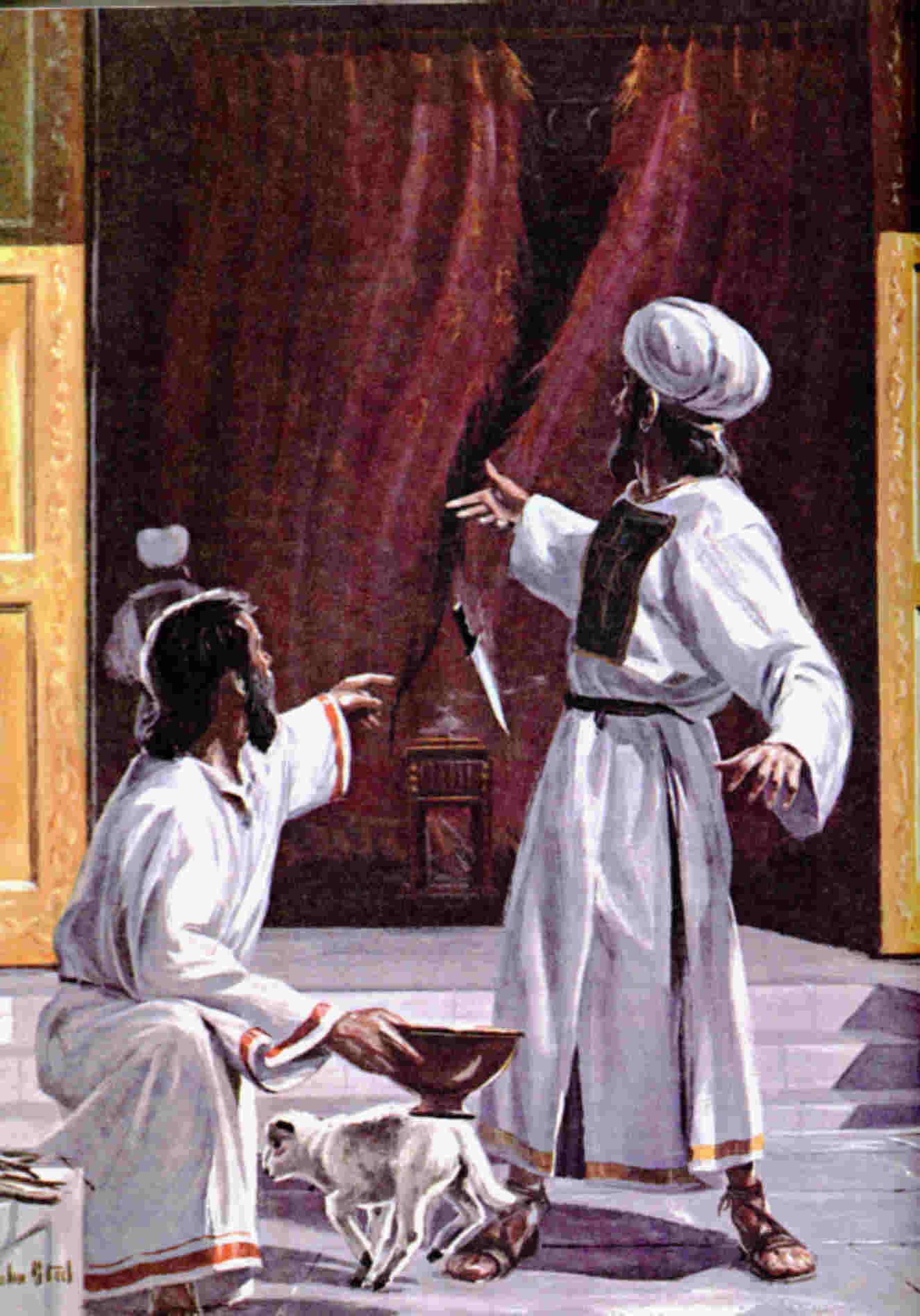 For centuries God had met with His people in the temple, and accepted their offerings of praise and thanksgiving; but a change came. When Christ died on Calvary and the veil of the temple was rent asunder, the virtue of the temple service came to an end. The Jews slew their paschal lambs as formerly, but the service was only a mockery; for that year, upon the fourteenth day of the month Abib, "Christ our Passover was sacrificed for us."

The Jews kept the empty form of the Sabbath on the day following the Passover; but it was the rest experienced by Jesus and His followers that was accepted of God. On the sixteenth day of the month, in the year the Saviour died, the Jews in the temple God had forsaken went through the empty form of offering the heads of grain, while Christ, the antitype, arose from the dead, and became "the first-fruits of them that slept." (1 Cor. 15:20) Type had met antitype.

Every field of ripened grain gathered into the garner, is but a reminder of the great final harvest, when the Lord of the harvest, with His band of angel reapers, will come to gather the spiritual harvest of the world. Just as the first handful of grain was a pledge of the coming harvest, so the resurrection of Christ was a pledge of the resurrection of the righteous; "for if we believe that Jesus died and rose again, even so them also which sleep in Jesus will God bring with Him.'' (1 Thess 4:14)

The priest did not enter the temple with only one head of grain, he waved a handful before the Lord; neither did Jesus come forth from the grave alone, for "many bodies of the · saints which slept arose, and came out of the graves after His resurrection.'' (Matt. 27:52,53) While the Jews were preparing to perform the empty service of the offering of first-fruits in the temple, and the Roman soldiers were telling the people that the disciples had stolen the body of Jesus, these resurrected saints went through the streets of the city, proclaiming that Christ had indeed risen. (Matt. 28:11-15)

It is a sad fact that even the disciples who loved their Lord were so blinded that they could not recognize the fact that the time had come for the appearance of the great Antitype of the service they had yearly celebrated all their lives; and even when they listened to the announcement of His resurrection, it seemed to them as an idle tale, and they believed it not. (Luke 24:10,11)

But God never lacks for agents. When living human beings are dumb, He awakens sleeping saints to perform His appointed work. In the type the grain was waved in the temple, and to fulfil the antitype Christ must present Himself and the company who had risen with Him before God in the first apartment of the heavenly temple.

In the early morning of the resurrection day, when Jesus appeared to Mary, she fell at His feet to worship Him, but Jesus said to her, "Touch Me not; for I am not yet ascended to My Father:but go to My brethren, and say unto them, I ascend unto My Father, and your Father; and to My God, and your God.'' (John 20:17) In these words Jesus notified His followers of the great event to take place in heaven, hoping that on earth there might be an answering chord to the wonderful rejoicing in heaven; but just as they had slept in the garden on the night of Christ's agony, and failed to give Him their sympathy, (Matt. 26:40-44) so now, blinded by unbelief, they failed to share the joy of the Saviour's great triumph. Later on the same day Jesus appeared to His followers, and allowed them to hold Him by the feet and worship Him, (Matt. 28:9) showing that in the meantime He had ascended to His Father.

Paul tells us that when Christ ascended up on high, "He led a multitude of captives." (Eph. 4:8 marg.) In speaking of them in Rom. 8:29, 30, he tells how this company of resurrected saints, who came forth from their graves with Christ, were chosen. They were "predestinated," then "called, .... "and whom He called, them He also justified:and whom He justified, them He also glorified." This was done that "He might be the first-born among many brethren." This company was composed of individuals chosen from every age, from that of Adam down to the time of Christ. They were no longer subject to death, but ascended with Christ as trophies of His power to awaken all that sleep in their graves.

As the handful of grain in the typical service was a pledge of the coming harvest, so these saints were a pledge of the innumerable company that Christ will awaken from the dust of the earth when He comes the second time as King of kings and Lord of lords. (John 5:28,29)

Little did the inhabitants of earth dream of the wonderful antitypical offering of first-fruits that was being celebrated in the heavenly temple at the time the Jews were carrying out the empty forms in the temple on earth.

That was a wonderful congregation in the heavenly courts. All the hosts of heaven and representatives from the unfallen worlds were assembled to greet the mighty Conqueror as He returned from the most terrible war ever waged and the greatest victory ever won. Earthly battles that simply gain dominion over a small portion of the earth for a brief span of years, are as nothing compared with the war that raged between Christ and Satan here upon this earth. Christ returned to heaven bearing the scars of that terrible struggle in the prints of the nails in His hands and feet and the wound in His side. (Isa. 49:16)

Words fail to describe the scene as the heavenly host with one accord fail prostrate at His feet in adoration; but He waves them back, He bids them wait. Jesus has entered heaven as "the first-born among many brethren," and He will not receive the worship of the angels until the Father has accepted the first-fruits of the harvest to be gathered from the world He has died to redeem. (Matt. 13:38-43)

He does not plead in vain. The great antitype of the service celebrated for centuries is fully met. The Father accepts the first-fruits as a pledge that all the redeemed host will be received by Him. Then the decree goes forth, "Let all the angels of God worship Him." (Heb. 1:6)

We wonder how Christ could ever leave the glories of heaven to return to the earth, where He had met only ignominy and reproach. But marvelous is the power of love! His sorrowing followers on earth were so dear to His heart that the worship of all heaven could not keep Him from them, and He returned to comfort and cheer their hearts.

The first three days of the Passover feast typified wonderful events in the work of our Saviour. The first day typified His broken body and shed blood; and the day before the type met antitype, Christ gathered His disciples together and instituted the touching memorial service of the Lord's supper, to commemorate His death and suffering until He comes a second time. (Matt. 26:26-29)

Every weekly Sabbath of the Lord is a memorial of that Sabbath on which Jesus rested in the tomb, after He had finished His work on earth for the redemption of a lost race.

God has not left His church without a memorial of the great antitype of the offering of the first-fruits. He has given them baptism to commemorate this glorious event. As Christ was laid in the tomb, so the candidate for baptism is laid in the watery grave. "We are buried with Him by baptism into death:that like as Christ was raised up from the dead by the glory of the Father, even so we also should walk in newness of life." (Romans 6:4)

Bible students for centuries have been divided into two classes in regard to their opinion of the time that the Lord ate the last supper with His disciples. One class believe Jesus did not fulfil the type in regard to the time, but only as to the event. They claim that the year Christ died, the 14th day of Nisan, or Passover, came on Thursday; that He was crucified on Friday, the annual Sabbath, the 15th day of Hisan; that He lay in the tomb while the first-fruits were waved in the temple on the 16th day of Nisan; and arose from the dead on the 17th day of Nisan. In support of this position, they quote the following texts:Matt. 26:17; Mark 14:1, 12; Luke 22:7.

The other class believe that, when God decreed certain offerings should be offered on a definite day of the month, the type would meet antitype at that specified time. "These types were fulfilled not only as to the event, but as to the time.'–Great Controversy, p. 399. In fulfillment of this Christ was crucified on Friday, the 14th day of Nisan, and died on the cross about the ninth hour–"between the two evenings"–at the very time the Passover lamb had been slain for centuries. The previous evening He had eaten the last supper with His disciples. The Saviour rested in the tomb on the Sabbath, the 15th day of Nisan, which had been kept as an annual Sabbath in type of this event. "Christ was the antitype of the wave-sheaf, and His resurrection took place on the very day when the wave-sheaf was to be presented before the Lord." – Desire of Ages, large edition, p. 785. This was Sunday, the 16th day of Nisan. In support of this position the following texts are quoted:John 13:I,2; 18:28; 19:14; 13:29; 19:31.

"The Cross and Its Shadow" Chapter 15, pp. 108-114
Stephen Haskell was first introduced to Sabbath keeping Adventist in 1853 at the age of 22. He served as an Adventist evangelist, church administrator, missionary, writer, and Bible teacher over the next 67 years. Stephen Haskell--Table of Contents to His book "Cross and It's Shadow"