Welcome!
Close
Would you like to make this site your homepage? It's fast and easy...
Yes, Please make this my home page!
No Thanks
Don't show this to me again.
Close
The Court of the Sanctuary
It's Services,
Chapter 25
"The Cross and It's Shadow"
by Stephen HaskellArise, my soul, arise,
Shake off thy guilty fears;
The bleeding Sacrifice
In my behalf appears:
Before the throne my Savior stands;
My name is written on His hands.

He ever lives above,
For me to intercede:
His all redeeming love,
His precious blood to plead'
His blood was shed for all our race,
And sprinkles now the throne of grace.
(Charles Wesley)

The Court And Its Services
The tabernacle was surrounded by a court one hundred cubits long and fifty cubits wide. This court was enclosed by curtains of fine twined linen hung from pillars of brass. The pillars were trimmed with chapiters and fillets of silver, and the curtains were suspended from silver hooks. The court formed an oblong, and was placed with its longest sides toward the north and south and the ends toward the east and west. The door, or entrance, of twenty cubits width, was in the center of the east end of the court. The curtains forming the door of the court were of "blue, and purple, and scarlet, and fine twined linen wrought with needlework," and were suspended from four pillars of brass, trimmed with silver. (Ex. 27:9-18)

There were two principal articles of furniture in the court, the laver and the altar of burnt-offering. The altar was overlaid with brass; the laver and all the vessels of the court that were used in the services connected with the altar, were of brass. 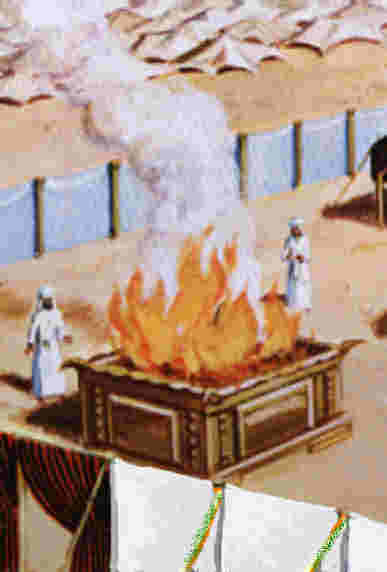 No part of the sanctuary or of the court was made according to the plans of men; but every part was fashioned after the divine model. When the Lord had given Moses the directions in regard to making the brazen altar, He added, "As it was showed thee in the mount, so shall they make it." (Ex. 27:8)

The altar was a hollow box, five cubits square and three Cubits high, made of boards of acacia wood. There was a horn of the same wood on each corner. A network of brass in the center held the fire and gave draft for it, and allowed the ashes to fall beneath. The entire altar with the horns was all overlaid with brass. (Ex. 27:1-8)

It was "an altar most holy:whatsoever toucheth the altar shall be holy," was the divine decree. (Ex. 29:37) It was because of this, no doubt, that Adonijah and Joab fled and caught hold of the horns of the altar when they feared death at the hands of Solomon. (1 Kings 1:50;2:28)

All burnt-offerings of the sanctuary were burned upon the brazen altar. The fire was kindled by the Lord Himself, (Lev. 9:24) and was kept burning continually. It was never to go out. (Lev. 6:13) The fire which destroys all sin from the earth, like the fire on the brazen altar, will come down from God out of heaven, and will not be quenched as long as there is any sin to be consumed. (Rev. 20:9, Mark 9:43-48)

The entire body of the whole burnt-offering and portions of various offerings were burned upon this brazen altar. It consumed that which typified sin; and as the fires were continually burning, it has been called "the altar of continual atonement." Sin separates man from God, (Isa. 59:2) and all sin must be put away before the sinner can be at-one-ment with God. Therefore the work done upon this altar was a symbol of the final destruction of sin, which will be necessary before the redeemed can enjoy their eternal inheritance.

The horns of the brazen altar were often touched with the blood of the different offerings, and the blood of every sin-offering was poured out at the base of this altar.

With only a few exceptions, all the sacrifices were slain in the court, at the door of the tabernacle of the congregation, as the entrance of the first apartment was often called; for the whole congregation of Israel could assemble in the court and at this door. None but priests could enter within the sacred precincts of the tabernacle itself, for it typified the heavenly sanctuary, where God and Christ abide, surrounded by shining cherubim and seraphim. All the work performed in the court was typical of work done in the earth, while the work performed in the first and second apartments of the sanctuary was typical of work done in heaven.

No sacrifice was ever slain within the sanctuary; but the offerings were slain in the court, and the blood and flesh were carried within the sanctuary by the priest. Christ, the great antitypical Sacrifice, was slain in the antitypical court, this earth, and then entered the antitypical sanctuary in the heavens with His own blood and the same body in which He bore our sins on Calvary. Sins are forgiven, and are blotted out from the books in the heavenly sanctuary; but they are not destroyed there. Just as in the type the fires of the brazen altar in the court consumed that which in type represented sin; so in the antitype, the wicked will be "on the breadth of the earth" when fire comes down from God out of heaven and devours them. (Rev. 20:9) This earth is the great antitypical court, where all the work typified in the court of the earthly sanctuary will meet its fulfillment.

The constant burning upon the altar of that which typified sin, caused an accumulation of ashes. The priests in the earthly sanctuary served "unto the example and shadow of heavenly things," (Hebs. 8:5) and even the removal of the ashes was directed of the Lord to be done in a manner to typify a portion of the final work of Christ. The priest was to be clothed in the pure white linen garments, when he removed the ashes from the altar. The ashes 'were first taken up by the priest and placed "beside the altar" on the east side. (Lev. 6:10; 1:16) When the time came to remove them from beside the altar, the priest laid aside his priestly robes, and "put on other garments;" then he carried the ashes forth without the camp, and poured them out in "a clean place." (Lev. 6:11) Ashes are a11 that will remain of sin, sinners, and the devil after the fires of the last d a y h a v e finished their work. (Mal. 4:1-3, eze. 28:18,19) When the purifying fires of the Lord have removed the last trace of sin, there will appear a new earth, a clean place, without one taint of sin upon it; and as the righteous walk over the face of the clean, pure earth, the ashes of sin and all that clung to sin in this earth will be under their feet. Truly the type will then have met its antitype, and the ashes of all sin will be in "a clean place."

When the priest placed the ashes beside the altar, he was clothed in his priestly robes. The ashes represented the confessed sins of the righteous. When Christ bears the confessed sins of His people, He wears His priestly robes; but the time comes when He will place the sins of the righteous on the head of Satan, lay aside His priestly garments, and come to this earth clad in kingly robes, to gather out of His kingdom all things that offend and do iniquity, (Matt. 13:41) Then all sin and sinners will be burned in the fire. Not in priestly robes will Christ come out into the antitypical court, the earth, to complete the final destruction of sin; but as King of kings and Lord of lords.

Much of the typical service was directed by the Lord in a way to arouse a spirit of inquiry in the minds of the young, so that they themselves would ask for information. The Passover was planned so that the children would say, "What mean ye by this service?" (Ex. 12:26) The twelve stones were piled up on the banks of Jordan as a "sign" to attract the attention of the children, so that in answer to their question, "What mean ye by these stones?" they might be taught of the time when God stayed the floods of Jordan before the hosts of Israel. (Joshua 4:1-6) If the curiosity of the child is aroused and he himself makes the inquiry, the lesson is more forcibly impressed upon his mind.

It would seem that for this reason God had the ashes of the sacrifice at first placed on the east of the altar, where they would be so conspicuous that every child entering the court could not fail to see and ask, "What mean ye by these ashes?" and then he would be taught by the parent the wonderful truth that all sin would be finally burned to ashes in the fires of the last day. (Mal. 4:1-3)

As the children went without the camp with their parents, their attention would be attracted by the unusual sight of ashes being placed in a perfectly clean place; and in reply to their questions the beautiful lesson of the new earth, which will come forth from the fires that destroy the last trace of sin, would be impressed upon their young minds. By the ashes and the blood at the base of the altar in the typical services of the court, the purifying of this earth from sin was kept before the minds of Israel.

While the congregation of Israel could gather in the court, the priests alone were to perform the work at the altar, (Num. 18:2-7) The Levites were given charge of the sanctuary, but they could not perform the service of the altar, for that typified work which none but Christ could do. He alone can destroy sin. 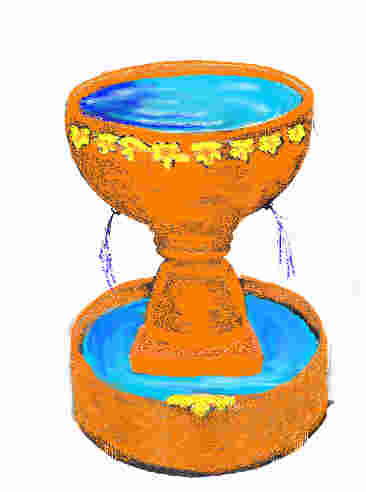 The laver was between the brazen altar and the door of the sanctuary. The laver and its base were both of brass. Water was kept in them, for the priests to wash both their hands and their feet before they entered the sanctuary to perform any service. They were also required to wash both hands and feet before they went "near the altar to minister, to burn offering made by fire unto the Lord." Death was the penalty for performing service at the altar or within the tabernacle without first washing in the laver. (Ex. 30:17-21) As the people in the court beheld the priests wash in the water before they performed the work of the holy office, may it not have taught them the truth that Christ gave to Nicodemus, "Except a man be born of water and of the Spirit, he cannot enter into the kingdom of God"? (John 3:5, Titus 3:5, Eph. 5:26)

"The Cross and Its Shadow" Chapter 25, pp. 173-180
Stephen Haskell was first introduced to Sabbath keeping Adventist in 1853 at the age of 22. He served as an Adventist evangelist, church administrator, missionary, writer, and Bible teacher over the next 67 years.
Stephen Haskell--Table of Contents to His book "Cross and It's Shadow"